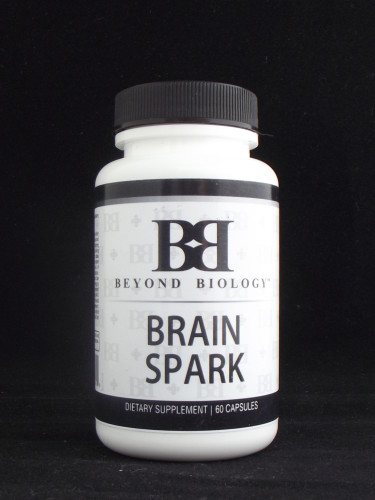 Brain Spark from Beyond Biology an anti-aging supplement for your brain and memory. Get back that memory & sharpness that you may have lost.

BRAIN SPARK formulated by Beyond Biology physicians provides a proprietary blend of ingredients which help support memory, concentration and increased circulation in the brain. It contains these important ingredients to spark your brain!

Bacopin supports memory by helping to repair damage to the nerve synapses the protein network in the brain where signals are transmitted. Bacosides are natural chemical compounds found in Bacopin and help to fortify Kinase, the protein in the body responsible for replacing old, worn-out neurons with new ones.

Phosphatidylserine is a phospholipid that is present in the structure of cell membranes. Research conducted in Italy during the 1980’s established that phosphatidylserine improved memory deficits, restored age-dependent electroencephalogram (EEG) abnormalities, prevented the decline in learning capacity and prevented some degenerative nerve cell changes in certain areas of the brain.

Acetyl-L Carnitine (ALC) supports the conversion of choline into acetylcholine, a key neurotransmitter in the body. ALC also increases the release of sufficient levels of acetylcholine for transmission of messages in the brain from one nerve cell to the next.

DMAE (Dimethylaminoethonal) was formally sold as a component in prescription medications but is available today as a dietary supplement. Like ALC, DMAE is thought to have a direct effect on the production of acetylcholine a neurotransmitter. .

Ginkgo Biloba Extract is mentioned in study after study demonstrating benefits of this amazing herb in supporting circulation in the brain, increasing mental alertness and concentration. Ginkgo is also being researched for possible benefits in the treatment of Alzheimer’s disease.

L-Glutamine is thought to have a positive effect on concentration, this amino acid is known to play an important role in combating stress, elevating energy levels in the brain and increasing mental alertness.

St. John’s Wort is an herb that dates back hundreds of years and is considered an effective treatment by many for depression and anxiety. It is commonly used today as a natural mood elevator.

* Percent Daily Values are based on 2,000 calorie diet.

Take 1-2 capsules per day on an empty stomach or as directed by your qualified health care consultant.

KEEP OUT OF REACH OF CHILDREN DO NOT USE IF SAFETY SEAL IS DAMAGED OR MISSING.

Disclaimers: *This statement has not been evaluated by the FDA. This product is not intended to diagnose, treat, cure or prevent any disease.

There are no reviews yet.

Be the first to review “Brain Spark 60 caps” Cancel reply