What is a Hormone? 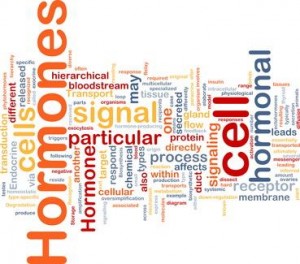 Hormones can be defined as chemical messengers sent through the blood stream to control the functioning of the body’s organs. The glands of the endocrine system are controlled by the pea-sized pituitary gland at the base of the skull and secrete most of the hormones. A hormone produced in one part of the body is secreted and coordinates function in a different part of the body. The word hormone originates from a Greek word, which means ‘to set in motion’. In humans and animals, hormones control various body activities like growth, reproduction and development.

As early as in 1902 scientists discovered the very first evidence of existence of hormones. In that same year British researchers found out that there were chemical substances that also controlled activities in the digestive system. Since then scientists have discovered more than 50 hormones secreted by the human body. They have also come up with ways of studying hormones from living tissue and techniques for producing them for hormone replacement in the laboratories.

Endocrine glands, also known as ductless glands, produce most of the hormones in the human body. The endocrine glands include two adrenal glands, four parathyroid glands, pituitary gland, thyroid gland, hypothalamus, pineal body, and sex glands (ovaries and testes). Some hormones, like insulin are also secreted by endocrine tissue present in organs, which are not endocrine glands like the stomach and the pancreas to aid with digestion.
The endocrine glands secrete hormones into the blood and the blood transports them throughout the body. By traveling to various parts of the body, hormones can regulate a number of organ functions. They are then classified according to the functions they regulate. These hormones support functions in the digestive system in the way the body uses food; for sexual function and reproduction; for growth; the regulation of blood composition; the response of the body to various stimuli; and the control of hormones themselves by a feedback mechanism.

Many people suffer from inadequate production of hormones in the body. Doctors can use various hormones to treat people having many types of hormone deficiencies. Hormone therapy helps a person to combat a number of symptoms of various ailments. With the use of scientific diagnostic testing of blood, saliva and urine we can accurately find and treat all types of hormone issues especially in aging people.